Let's Tap down under

Oz to soon be covered in goo 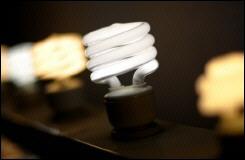 While some US cities like Raleigh are already planning steps to cut back on energy wastes by converting to more efficient lighting systems, it looks like the entire continent of Australia could be following suit. Claiming to be the "world's first" national government to phase out incandescent light bulbs in favor of the more "fuel-efficient, compact fluorescent bulb," environment minister Malcolm Turnbull is hoping to "cut Australia's greenhouse gas emissions by four million metric tonnes a year by 2015." Citing the "climate changes" the world is facing as a "global challenge," Turnbell also urged other nations to follow suit in making a difference, but didn't exactly open up his personal wallet to stock our households with those uber-pricey bulbs. Interestingly, some environmentalists feel that the bulk of greenhouse gas emissions come from government and business-related activities, which should presumably take priority over swapping out a country's light bulbs. Still, we've got no complaints with hooking homes up with LED / fluorescent options to help Mother Earth, but shouldn't Australia (and America, too) ink its name on the Kyoto Protocol before getting all high and mighty about saving the planet?

In this article: aussie, Australia, down under, DownUnder, electricity, energy, environment, green, kyoto, law, light, lighting, minister, oz, power, sydney
All products recommended by Engadget are selected by our editorial team, independent of our parent company. Some of our stories include affiliate links. If you buy something through one of these links, we may earn an affiliate commission.
Share
Tweet
Share