The jets & sets of After Burner: Black Falcon 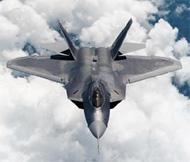 Lockheed's shiny new F-22 Raptor stealth fighters may have owned a few war games, but crossing the International Date Line left them as helpless as a carrot in a rabbit trap, with multiple system crashes causing an emergency detour en route from Hawaii to Okinawa, Japan. Communication, fuel subsystems, and navigation systems were rendered useless and repeated "reboots" were of no help. Luckily, the fleet had clear skies and refueling tankers to guide them back to Hawaii. If they had separated from the tankers, "they would have turned around and probably could have found the Hawaiian Islands. But if the weather had been bad on approach, there could have been real trouble," states Retired Air Force Major General Don Shepperd. The voyage suffered a two-day delay on account of the system failures -- "a computer glitch in the millions of lines of code, somebody made an error in a couple lines of the code and everything goes." What should have been a showy parade of $125+ million super fighters quickly turned to disaster for Lockheed who would've had a lot of explaining to do, had this happened during combat.

In this article: F-22, Hawaii, Japan, Lockheed, Lockheed Martin, LockheedMartin, malfunction, Raptor, software malfunction, SoftwareMalfunction
All products recommended by Engadget are selected by our editorial team, independent of our parent company. Some of our stories include affiliate links. If you buy something through one of these links, we may earn an affiliate commission.