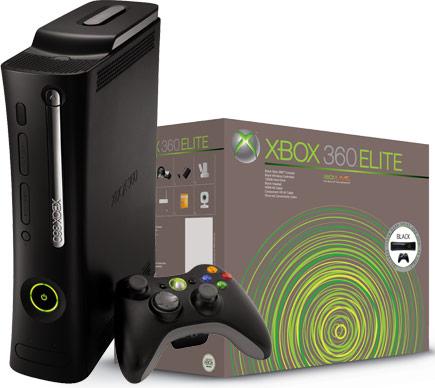 HD nerds and Xbox fanboys, the moment you've been waiting for: the Xbox 360 Elite we alerted you about way back when it was just called the Zephyr has finally been announced. As we previously mentioned, it will be black, it will have HDMI, and it will have a 120GB drive (it'll also come bundled with a one month Xbox Live trial) for $479. Unfortunately, also as mentioned before, it's not going to have the new 65nm CPUs, it still doesn't have integrated WiFi (Xbox said it's because a study showed the majority of their customers use Ethernet to connect -- huh?), and it won't have an integrated HD DVD drive (not that we expected otherwise). Microsoft did make some marketing decisions since our sources spilled the beans on this thing though: it's not going to be limited edition, as we previously had. Instead, the Elite will be a permanent SKU, the third and top-tier Xbox device. On the solo 120GB drive side of things, that unit will cost $179, and will come with a cable and software to migrate from your old 20GB drive. (MSFT wasn't yet sure if that kit would be sold separately for new Elite users -- sounds like it will be though, and will be priced very reasonably.) More info:
It's out April 29th in the US and Canada, people. Ready for your second Xbox? No? Well, it's still cheaper than that other black game console. 17
In this article: breaking news, BreakingNews, elite, microsoft, new line, NewLine, xbox, xbox 360, xbox 360 elite, xbox live, xbox live marketplace, Xbox360, Xbox360Elite, XboxLive, XboxLiveMarketplace
All products recommended by Engadget are selected by our editorial team, independent of our parent company. Some of our stories include affiliate links. If you buy something through one of these links, we may earn an affiliate commission.
Share
Tweet
Share