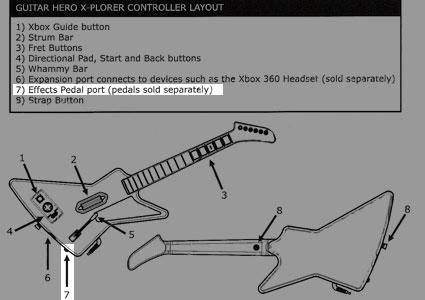 Praise be to the Circuit City's and Wal-Mart's of the world as Guitar Hero II for the Xbox 360 has arrived a few, scant days early on Mount Joystiq. What? You actually go to a game store to buy your games? You should probably stop doing that. After shredding it up like only nerds with tiny, plastic toy guitars can, we actually took a look at the instruction manual, curious as to any information regarding the mystery port found at the base of the X-Plorer.

Rockin'! Now that we know for sure that it's for some sort of effects pedal, we curl up into the fetal position. We've been scorned in the past by these sorts of shenanigans. We're looking at you, Konami! We still want our Beatmania III pedal!

(Update - Because everyone is insane and paranoid about April Fools, we've included some actual pictures of the manual in question behind the cut. We even threw in some Mudkip because we heard that you like him so much.)

Mudkip is happy about Guitar Hero 2 for Xbox 360. Why can't you be that happy and trusting? Oh, right. The instruction booklet with the pedal blurb is actually an insert that comes with a sticker pack for your gee-tar. Don't worry manual nerds. You'll still get your full-color goodness.

Here is an actual picture of what we scanned at the top of the page. Feel free to toss it into Photoshop and zoom in all you want. Or if you're cool, you can hold down CTRL and use your mouse wheel, right?

Finally, here is the other side of the page that we quoted. Now you understand why we didn't just scan it. If you'll excuse us, we need to get back to unlocking songs.
In this article: guitarhero, guitarhero2, redoctane, Xbox-360
All products recommended by Engadget are selected by our editorial team, independent of our parent company. Some of our stories include affiliate links. If you buy something through one of these links, we may earn an affiliate commission.
Share
Tweet
Share