Fauxhawk robot exterminates wasps, is something of a fashion victim 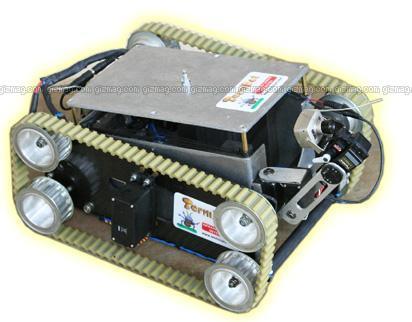 Termites be warned: Australian outfit Termicam is bringing the noise Predator-style with the Termibot, a dual-tread thermal imaging robot designed to eliminate insects. The bot scoots around inside walls and under houses relaying information from its thermal camera and moisture sensors back to an operator, and when termite (or other insect) activity is detected, it uses a probe to smash the nest and inject pesticides directly where they're needed. While we're not certain we need to help robots perfect the techniques they'll use to ferret out the last remnants of the human resistance, we're not too worried yet -- the Termibot is currently tethered to its operator with a long cable. The designer says a fully wireless version is in the works and will be brought to market later this year, however -- it's being held up while the business experiences some growing pains. Termicam also says they're also looking to expand the uses for the bot to other applications where that thermal camera might come in handy, like bomb disposal and search and rescue -- looks like the PackBot's got some competition.

[Via Crave]
In this article: exterminator, termibot, termicam, thermal imaging, ThermalImaging
All products recommended by Engadget are selected by our editorial team, independent of our parent company. Some of our stories include affiliate links. If you buy something through one of these links, we may earn an affiliate commission.
Share
Tweet
Share