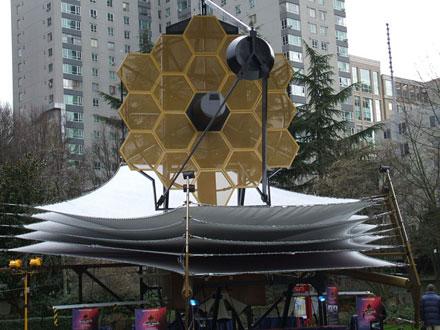 With Hubble slowly winding down after years of service, NASA has now taken to talking up the telescope's successor, even going so far as to take a full-scale model of the James Webb Space Telescope (JWST) on the road. Currently on display outside the Smithsonian National Air and Space Museum in Washington, D.C., the model measures an impressive 80 feet long and 40 feet high, which you'll have to be content with until the actual telescope launches in June 2013 at a cost of $4.5 billion. Once deployed, the telescope will sit some 1.5 million kilometers (or 930,000 miles) from Earth, and be able to peer far deeper into space than Hubble is able to, thanks in large part to the JWST's ginormous foldable mirror (almost three times bigger than Hubble's). If you can't make it to the Smithsonian to check out the model, you can at least get a better look at it in the gallery of images below courtesy of NASA. 4
In this article: hubble, james webb space telescope, JamesWebbSpaceTelescope, jwst, nasa, science, space, telescope, TL16JWEBB, TL17WEBB
All products recommended by Engadget are selected by our editorial team, independent of our parent company. Some of our stories include affiliate links. If you buy something through one of these links, we may earn an affiliate commission.
Share
Tweet
Share