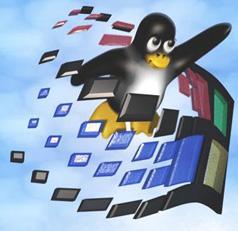 Aw snap. Just when you thought the Microsoft / open-source relationship was getting bad, it's now getting even worse, as yet another turn has been taken in the on-again, off-again love affair between the two. Soon after Microsoft's General Counsel claimed that free and open-source software (FOSS) -- a bundle of which related to Linux -- violated precisely 235 of its patents, Linus Torvalds decided to fire back on behalf of the little guy. In an interview with InformationWeek, Mr. Torvalds retorted by suggesting that it is actually "a lot more likely that Microsoft violates patents than Linux does," and even noted that if "the source code for Windows could be subjected to the same critical review that Linux has been, Microsoft would find itself in violation of patents held by other companies." Of course, he backed his statements by stating that the "fundamental stuff was done about half a century ago and has long, long since lost any patent protection," and closed things up by insinuating that Redmond should put its cards on the table so that Linux users prove 'em wrong, or better yet, "code around whatever silly things they claim." As if you couldn't tell, them's fightin' words, folks.

[Via IDM, image courtesy of TACTechnology]

In this article: conflict, court, debate, fued, infringment, legal, Linus Torvalds, LinusTorvalds, linux, litigation, media pc, media pcs, mediapc, mediapcs, microsoft, open source, open-source, OpenSource, operating system, OperatingSystem, os, patent, patented, patents, software, trademark
All products recommended by Engadget are selected by our editorial team, independent of our parent company. Some of our stories include affiliate links. If you buy something through one of these links, we may earn an affiliate commission.
Share
Tweet
Share