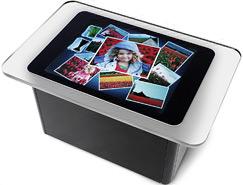 Over the years we've seen plenty of surface and gestural interface computing systems and prototypes, but nothing mass-market -- nothing consumable, if you will. Microsoft aims to change all that with Surface, its first foray into surface / gestural interfaces; arriving in the form of a 30-inch table-like display, Microsoft envisions its eventual uses as pervasive as imaginable, like ordering beverages from your restaurant table and silently scanning your wine bottle's RFID tag to automagically present information on the vineyard and vintage. Sure, some of it's pretty pie in the sky, but Microsoft is touting Surface's multi-touch, multi-user interface, object recognition and gestural interaction, and it's out to dispel myths of vaporware with limited 2007 rollouts in T-Mobile stores, Starwood hotels, and even Harrah's in Vegas.

As for the consumer end of things, it's estimated that we're still a number of years out on the technology (for starters these Surface units are estimated to cost up to ten thousand bucks). Pretty steep for what ultimately amounts to being an underbelly projector with digital cameras that track surface interaction (all of which running on a stock 1GHz Vista box), but the focus of any nascent technology is never price, it's function.

P.S. -If you're feeling this thing check out the 18 minute demo over at Microsoft's On10.

11
In this article: breaking news, BreakingNews, gestural interface, GesturalInterface, interface, microsoft, surface, surface computing, SurfaceComputing
All products recommended by Engadget are selected by our editorial team, independent of our parent company. Some of our stories include affiliate links. If you buy something through one of these links, we may earn an affiliate commission.
Share
Tweet
Share