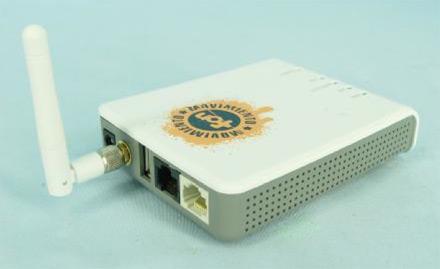 Ok, Fon's new La Fonera isn't too different from last year's business-stealing La Fonera -- except this time it has a second Ethernet jack if you have a computer or device you want to plug right on in (and don't want / need to use an external switch), or, we suppose, if you want to jack your Fonera into your home network (if you do want / need to use an external switch). We kind of wish Fon changed the name up a little on this thing, maybe re-conjucated it so it would become La Fonero or something, but it would seem the ethernet jack is the only think you've got to look forward to in version 2.

P.S. -Don't mind that USB port -- it only appears in some of the pictures and not in the documentation, so we're assuming that's just a port used in testing / debug units.
In this article: fcc, fon, fonera, la fonera, LaFonera, router
All products recommended by Engadget are selected by our editorial team, independent of our parent company. Some of our stories include affiliate links. If you buy something through one of these links, we may earn an affiliate commission.
Share
Tweet
Share