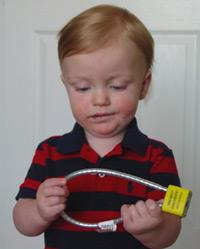 Noted security expert Marc Weber Tobias contributes The Lockdown, exposing the shoddy security you may depend on.

Two years ago I published an alert on my site regarding the inherent insecurity of gun trigger locks in the hope that manufacturers would remove them from the market or modify their design to make them more child-proof. Although some manufacturers now produce a more secure model to meet statutory requirements in California, even some of these can be easily compromised. Essentially nothing has changed: many manufacturers continue to sell products that are poorly designed, the consequences of which can be fatal -- literally. Even the cable locks that are provided under a US Justice Department grant to law enforcement agencies through Project ChildSafe for free dissemination to gun owners are inadequate.

I hope that this article will once again place all gun owners on notice of the dangers stemming from any form of trigger or cable lock to protect a weapon from unauthorized use by anyone -- but most importantly children. Have you ever seen an untrained eleven year old demonstrate the removal of three of the most popular trigger locks on the market from a rifle in just a few seconds? You will today. Read on.

Leave your beliefs on second amendment rights here -- this isn't about guns, this article is about the gun locks many rely on to keep their families and themselves safe.

Now, in one sense it is accurate to say that guns do not kill; people do. This is especially true when children have access to firearms. For this reason, statutes now mandate that a gun lock be provided with every handgun that is sold. Law enforcement agencies have gone one step further; under a program funded by the Justice Department, a cable lock is provided for the asking by many law enforcement agencies in the country. This initiative is called Project ChildSafe.

In interviews with representatives of Project ChildSafe, I was advised that the cable locks that they provide have been tested pursuant to ASTM and California DOJ standards, and "there never has been a problem" (other than the 2001 CPSC recall of 400,000 units, due to the fact they could be opened by rapping them on a hard surface).

In my opinion the answer "we have never had a problem" does not address some very real issues people need to be concerned about when it comes to gun safety: low standards of security coupled with the cheap design of many of gun locks makes for a dire hazard. When I told Project ChildSafe that these gun locks could be bypassed in a few seconds and that the cables could be compromised in less time than specified in the California DOJ standard, I was again told that the lock was secure and that it would be irresponsible to show how to defeat the mechanisms. I was also told that because I was an expert, my opinion in this regard really was not relevant -- the implication was that although I could open these locks, kids could not. Oh really? See the following video, wherein an untrained 11 year old breaks into three widely distributed gun locks.


After speaking with high level representatives that work for DOJ and a supervising employee of one of the certified testing laboratories, it is clear that Project ChildSafe / California testing criteria could be characterized as a minimal attempt to placate manufacturers, gun owners and the public. In other words, these "standards" reached the lowest common denominator of protection. As is usually the case, everyone involved compromised so as to pass the initiative, and I would argue that your security wound up as the loser.

There are two primary types of locks to protect handguns and rifles: trigger locks (top) that are supposed to prevent the trigger from being pulled, and cable locks (bottom) to prevent the firing of a weapon by blocking the barrel or the use of ammunition. We have evaluated several popular locks to assess their security, including the Project ChildSafe PCS GL710N, Master 109, and Adstar model AB106B and AB105. What we found continues to amaze and trouble us: many of these locks can be removed in seconds with little skill. No real expertise is required, nor is locksmith training. Reference manuals are not needed -- there is already plenty of information on the internet for kids to find and read.

What's more, major manufacturers of popular locks such as Master, Winner International, Remington, Hoppes, and Franzen Security Products have designed their products with virtually identical operating features; they have effectively copied each others' deficient or defective designs. (The Franzen lock above is easily compromised even with a piece of paper or plastic -- sound familiar?) As demonstrated in the accompanying report, these can be compromised in seconds with an ice pick or long and thin screwdriver. To make matters worse, I demonstrated the removal of some of these locks from my Glock 9mm by slamming the butt against a hard surface. It was no problem to cause the lock to fly apart, exposing the trigger.

In my view, these locks constitute a serious threat to the security of every child that has physical access to any weapon supposedly protected by these devices. (Responsible gun owners keep their guns in a secure gun safe with locks that cannot be opened by ball point pens or bump keys. Experts also caution that no gun should be left in a loaded condition -- obviously!) All that is true and yet we still continue to experience injuries and death from gun accidents, which is precisely why California has mandated regulations for Firearm Safety Devices. But none of these standards in my view, adequately protect against two serious "real world" threats: lock bumping, and simple compromise of the cables.

Anecdotally, when I demonstrated the problem with the Project ChildSafe cable locks to our county sheriff, he responded by immediately developing warning labels for every lock that his department gives away, cautioning every user not to rely on the device for any measure of security, but rather to utilize an approved gun safe.

But why are gun locks, of all locks, so insecure to begin with?

In response to findings by the Consumer Product Safety Commission about seven years ago and the California standards, Master Lock and many other companies designed a better trigger lock (and other types of devices) that could not be removed in the fashion that was demonstrated by the eleven year old. So why are the companies still selling their junk locks for guns if better designs are available? Good question.

When I interviewed one major manufacturer (and former client) about making their locks more secure, they stated that they did not sell enough of them to justify the expenditure. Profit before safety should not be the rule when we are talking about guns and kids. Locks that cost a couple of dollars to produce can never protect anyone or anything. In this instance, poor engineering and the desire for profits can kill.

As a consumer, you might ask why you shouldn't use the more secure California certified Master Lock model 106 (or equivalent) to protect your weapon? Simple: as with many other locks, the 106 employs a cylinder that I am sure costs less than one dollar; again, the manufacturers (and Master Lock knows better) continue to do it on the cheap, utilizing an easily compromised four pin tumbler cylinder that is employed in most of their less expensive padlocks. Even Project ChildSafe locks can be easily bypassed by a simple and quite readily available bump key. Granted, not every lock on the market can probably be characterized as severely vulnerable, but based upon the typical lock design I would suspect a high percentage can be rapidly opened. And we know a child can bump open locks, compliments of our friends at Kwikset and many other manufacturers! Unfortunately, in this case, these inexpensive locks can result in catastrophic consequences.

And remember the brilliant design of the Targus Armored cable lock we compromised last year? The one that was supposed to be impervious to attacks on its cable because of its superior strength? Well, some of the Project ChildSafe locks employ the same type of armored cable; ostensibly a good idea, but in practice not particularly secure. One must merely bend the cable over upon itself with a pair of pliers and the armored rings can actually be used to help sever the inner cable. No wire cutters required. Yes, it is better than nothing (maybe), but it also creates a false sense of security.

I laud the California legislature, U.S. and California DOJ, and Project ChildSafe for their efforts to protect guns and kids. But California should have drafted real standards and done more research to assess vulnerability of some of these devices that they certify as secure. In my view, the standards do not go far enough.

Gunlocks, unlike most other types of devices, present a unique risk of harm especially to children when they are improperly designed or cheaply made. In my view, virtually none of the inexpensive consumer-grade trigger or cable locks are secure. The false sense of security shades the truth, which is that they should not be relied upon for any measure of protection in rendering lethal weapons inoperable.

We all know that guns are an attractive nuisance for children. That is why the California legislature led the nation and enacted laws to protect kids. Gun lock manufacturers should act responsibly and either fix the design deficiencies and defects in their products or withdraw them from the market before tragedy results, either from accidental or intentional discharge of a weapon. Likewise, retail outlets should refuse to sell gun locks that are not properly engineered.

I would urge Project ChildSafe to push for more stringent testing requirements for these devices. They have an excellent program so why not distribute locks that are really secure? A gun lock can be made to properly protect a weapon. Just saving one kid would be worth all the effort.

Further information is available at in.security.org.

Marc Weber Tobias is an investigative attorney and security specialist living in Sioux Falls, South Dakota. He represents and consults with lock manufacturers, government agencies and corporations in the U.S. and overseas regarding the design and bypass of locks and security systems. He has authored five police textbooks, including Locks, Safes, and Security, which is recognized as the primary reference for law enforcement and security professionals worldwide. The second edition, a 1400 page two-volume work, is utilized by criminal investigators, crime labs, locksmiths and those responsible for physical security. A ten-volume multimedia edition of his book is also available online. His website is security.org, and he welcomes reader comments and email.
In this article: features, gun locks, GunLocks, locks, the lockdown, TheLockdown
All products recommended by Engadget are selected by our editorial team, independent of our parent company. Some of our stories include affiliate links. If you buy something through one of these links, we may earn an affiliate commission.
Share
Tweet
Share