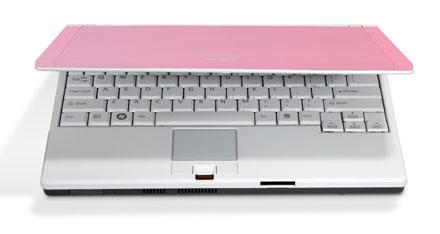 Fujitsu looks to be trying to get as much out of its P7230 ultraportable as possible, with the company now offering a bit more choice in the processor department, along with a new limited edition pink model for those tired of the standard un-colorful fare. Somewhat curiously, the most the pink model gets is a Core Duo U1400 Ultra Low Voltage processor, while the standard black model now tops out at a Core Duo U2500 ULV. Otherwise, the two boast mostly similar specs, including a 10.6-inch display, Intel 945GMS Express chipset, 1GB of RAM, and a max 80GB hard drive (though not more than 60GB on the pink model). Each also have the same $1,599 starting price, with the top-end U2500-based model running just over $2,000.

[Thanks, Pete]
In this article: fujitsu, p7230, ultraportable
All products recommended by Engadget are selected by our editorial team, independent of our parent company. Some of our stories include affiliate links. If you buy something through one of these links, we may earn an affiliate commission.
Share
Tweet
Share