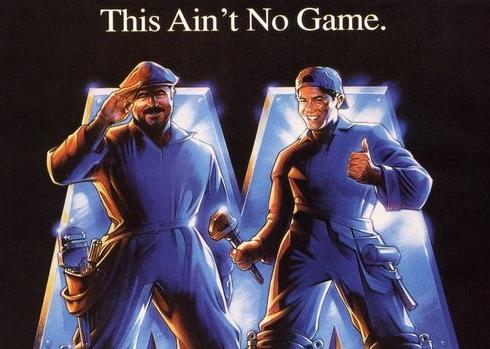 In a burgeoning film genre like video game adaptations, Super Mario Bros. (it ain't no game, in case you were confused) should be considered sort of a patron saint. No, it didn't set a great example that those who came next could follow, but it did set a bar for future video game movies that was so low they could trip over it. Now, thanks to a new interview in The Guardian, we learn that Mario Mario himself, Bob Hoskins, was on the SMB-hating bus before that particular bus was cool.

"The worst thing I ever did? Super Mario Brothers. It was a f***in' nightmare. The whole experience was a nightmare. It had a husband-and-wife team directing, whose arrogance had been mistaken for talent. After so many weeks their own agent told them to get off the set! F***in' nightmare. F***in' idiots." See what we mean? Let's see another video game movie engender that kind of hatred from a distinguished British actor. It can't be done! The bar is simply too low.

[Via Cinematical]
In this article: mario, movies, supermariobros
All products recommended by Engadget are selected by our editorial team, independent of our parent company. Some of our stories include affiliate links. If you buy something through one of these links, we may earn an affiliate commission.
Share
Tweet
Share