Tesla found a loophole that lets it lease cars in Connecticut

Two states are looking at Apple's deals with record labels 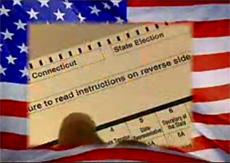 Not to anyone's big surprise, e-voting is apparently not the most straightforward process in the world, but Connecticut's Secretary of the State Susan Bysiewicz is going so far as to release a 90-second video clip that demonstrates how to correctly place a vote using a vanilla optical scan voting machine. Yep, this means you'll be able to surf on over and download a 1.5-minute instructional video that will purportedly "lure young voters to the polls," and while Bysiewicz did admit that those who could operate an iPod could likely figure out a voting machine, she's hoping that "providing voting information through a familiar mechanism" will somehow encourage the younger sect to get their vote on. We know, all of this is worthless sans a vid, right? Never fear, it's waiting to put you to sleep after the jump.

In this article: Connecticut, e-voting, evoting, lessons, optical scan, OpticalScan, video, voting, voting lessons, VotingLessons
All products recommended by Engadget are selected by our editorial team, independent of our parent company. Some of our stories include affiliate links. If you buy something through one of these links, we may earn an affiliate commission.
Share
Tweet
Share