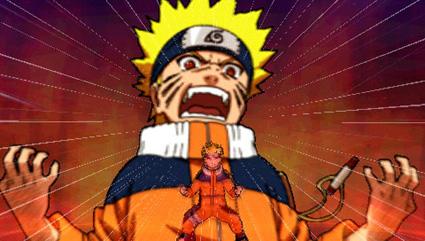 Why is Naruto so angry? That's because he knows a certain percentage of people out there are thinking that licensed games are sloppily slapped together and serve no other purpose but to milk the cash cow. Naruto: Ultimate Ninja Heroes, published by Namco Bandai, is surely using the license to its advantage, but the game behind it is no slouch either. This anime fighter is fast-paced, frantic and fun, but some design choices may leave serious fighting genre fans looking for something more refined.


With cel-shaded characters and familiar 3D backgrounds, the fights in Ultimate Ninja Heroes look like they were ripped straight from the TV show. And thanks to the smooth animations, which are often accompanied with common anime special effects like speed lines and written Japanese sound effects, your ninja of choice moves with the mobility that a ninja should. The frame rate is equally as slick, except when there are tons of moving items on the screen. Don't worry though, as these instances are rare and do not last long enough to negatively affect gameplay.

Each fight consists of two characters facing off in a multi-level battle arena. Players can warp from the foreground to the background and vice versa. In general, it is only possible to hit the opponent when he is on the same level as your character. Also found throughout the playing field are breakable item holders, which contain projectiles, power-ups, or health.

Both ninjas have a life bar and a chakra bar. The fight ends when you deplete your opponent's life bar using a combination of regular, projectile, and chakra based attacks. Chakra is the Naruto universe's version of mana, the fuel needed to pull off more potent special moves. Players gain chakra by collecting certain items or by holding down on the D-pad, but this second option leaves you vulnerable.

The fighting system has an array of attacks available to each character, as well as ways to counter each. There are normal attacks, throws and combos, more powerful jutsu attacks, a variety of projectile weapons, and the ridiculously powerful Secret Technique. All of these can be blocked with the guard button, or you can use a substitution jutsu, and warp behind your attacker in an instant. If timed correctly, this could lead to a back and forth of attack-substitution, counter attack-substitution which can last a few cycles before someone lands a hit. However, the timing of the substitution jutsu is strict and using it costs chakra, so no need to worry about never-ending skirmishes. Similarly, this substitution can be triggered during Extra Hits, special aerial attacks that can be activated after throws or combos. During Extra Hits, substitution costs no chakra, but the action occurs faster and faster after every substitution, essentially leading to an exciting rhythm game-like mini-game. Pulling off several substitutions and landing the final hit is satisfying stuff indeed.

Although everything can be blocked or countered, that does not mean that the balance is perfect. The previously mentioned Secret Technique requires a full chakra bar and a clean hit on an opponent. However, it is overpowered and the only weapon useful against the harder difficulties of AI. Not only does it take a huge chunk of life off, but it also gives the successful Secret Technique user a temporary advantage afterwards, usually by giving the character super strength and speed. In practice, it acts as a half a life bar attack, which can then be reused as soon as the advantage wears off and enough chakra is accrued.

Each of the 20 characters has a unique set of attacks, but they all basically feel like the same set of moves. Unlike a more complex fighter, like Virtua Fighter 5 with its various martial art styles, everyone fights like a ninja. Of course, everyone is a ninja, so that makes sense. It is hard to discern any significant difference between a slow and heavy hitter and a light but quick fighter when everyone can warp around anyway.

The single player experience consists of Heroes mode, Vs. mode, and Promotion Test. In Heroes mode, you create a team of up to 3 characters and face off against CPU teams. The fights are one on one, with the next person on the team replacing the loser. At the end of the team battle, your characters each gain a bit of health before you tackle the next CPU team. However, chances are that if you barely survive your last team battle, the next one will be near impossible to complete. Not only are you handicapped with low health, but the CPU always has a stat boost of some sort, usually Attack or Defense UP. This can be a frustrating situation, so try to avoid it by saving after every fight.

Vs. mode let's you have simple one on one battles, and Promotion Test is the same but with certain quirks. Usually the opponent has an extra stat boost, or there are restrictions on your character, like not being allowed to block attacks. Promotion mode would be tough if not for the Parameter Power-up section. Here you can spend points (which are acquired after every fight in any mode) to level up your favorite characters' stats, such as attack or speed.

Wireless mode let's you play against another friend via an ad-hoc connection. There is no infrastructure mode, but there is game-sharing, so only one UMD is necessary to bust out jutsus on your friends.

Overall, Naruto: Ultimate Ninja Heroes looks good, plays well, and uses the anime license effectively. However, no one is going to confuse this for a tournament-worthy fighter, mostly due to the Secret Technique being overpowered and the similar feel of each character. The single player experience is lengthy, and there are plenty of unlockable characters, movies and pictures. However, the lack of a story mode and cheap AI (who seemingly block everything) at two highest difficulties hurt the game's value. Also, fights can get confusing with all the warping going on, especially when both fighters are the same character, since the alternate costumes tend to look just like the main one. We wish infrastructure mode could have been supported, but perhaps the timing necessary for substitutions and counter-attacks would have been adversely affected.

Despite these flaws, fans of the anime will appreciate the amount of characters and their unique moves, the ninja-y fun of using substitutions and special jutsus, and the use of the original voice actors from the anime. Is Naruto: Ultimate Ninja Heroes a worthy purchase for Naruto fans? Believe it!

PSP Fanboy Score: 7.5
In this article: joystiqfeatures, namcobandai, naruto, review, ultimateninjaheroes
All products recommended by Engadget are selected by our editorial team, independent of our parent company. Some of our stories include affiliate links. If you buy something through one of these links, we may earn an affiliate commission.
Share
Tweet
Share