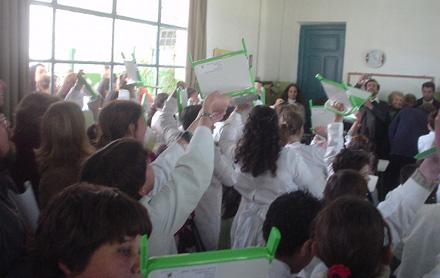 It looks like students in Uruguay could soon have plenty more to get wildly excited about, as it seems that the country's LATU organization is now set to buy 100,000 OLPC XO laptops, with an option to buy 50,000 more to the tune of $199 apiece. That's a bit less than the $200+ price we had heard Uruguay would be paying, but still well over the mythical $100 price the foundation has long been promising. According to Uruguay's El Pais newspaper, the decision (which has apparently yet to be finalized) follows an evaluation process in which the OLPC competed against Intel's Classmate PC. That ultimately ended with the OLPC narrowly beating out Intel's offering by a score of 56.84 to 53.06, with the OLPC's cheaper price apparently the determining factor.

[Via OLPC News]
In this article: olpc, olpc xo, OlpcXo, uruguay
All products recommended by Engadget are selected by our editorial team, independent of our parent company. Some of our stories include affiliate links. If you buy something through one of these links, we may earn an affiliate commission.
Share
Tweet
Share