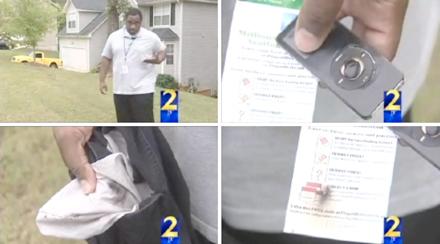 Prepare to be amazed at what passes for investigative journalism on television these days. Atlanta's WSB-TV Action News team ran a sensational iPod "nana" piece last night under the title "Man's Pants Catch Fire At Airport." To set the stage, WSB-TV says that the nano "uses the same technology as those troubled laptop batteries under recall due to the risk of fire." In steps Danny Williams -- mild mannered consumer, airport employee -- who claims that his iPod nano "burst into" chest-high flames while he was at work. So why isn't he covered in burns after exposure to such a serious chemical fire? We've all watched the horrifying video of a lithium ion battery explosion, right? Well, Danny claims that he was protected by a "glossy piece of paper" in his pocket at the time. Taking it up a notch, WSB-TV worries that Danny could have been mistaken for a terrorist due to his smoking airport trousers. Look, we're not saying that nothing happened, after all, we've written about an exploding iPod nano before. We're only saying that it didn't happen in the way described. Check the video of the hot-coffee-in-lap style legal preparation after the break.

In this article: apple, battery, explode, fire, gadgetry, gadgets, gear, ipod, ipod nano, IpodNano, lawsuit, legal, lithium ion, LithiumIon, TL18ATTK
All products recommended by Engadget are selected by our editorial team, independent of our parent company. Some of our stories include affiliate links. If you buy something through one of these links, we may earn an affiliate commission.
Share
Tweet
Share