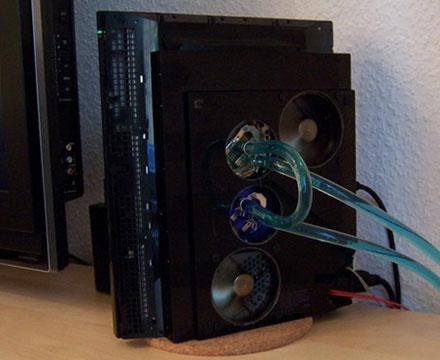 We've seen plenty of unnecessary mods in the past, but this latest creation from PlayStation.com forum member Dragonpower certainly ranks among the more superfluous, with it boasting just enough excess to make up for its lack of common sense. Apparently, Dragonpower found that his PS3 just wasn't cool enough for his taste, so he got drilling and strung some tubes filled with liquid coolant through the console, with a couple of extra fans thrown in for good measure. That seems to have resulted in a temperature of just 32ºC (or 90ºF) under a heavy load, with the console itself said to be "almost dead silent." Dragonpower apparently still sees more room for "improvement," however, as he says this mod is still in progress.

[Via Joystiq]
In this article: console mod, ConsoleMod, liquid cooled, liquid cooling, LiquidCooled, LiquidCooling, mod, playstion 3, Playstion3, ps3
All products recommended by Engadget are selected by our editorial team, independent of our parent company. Some of our stories include affiliate links. If you buy something through one of these links, we may earn an affiliate commission.
Share
Tweet
Share