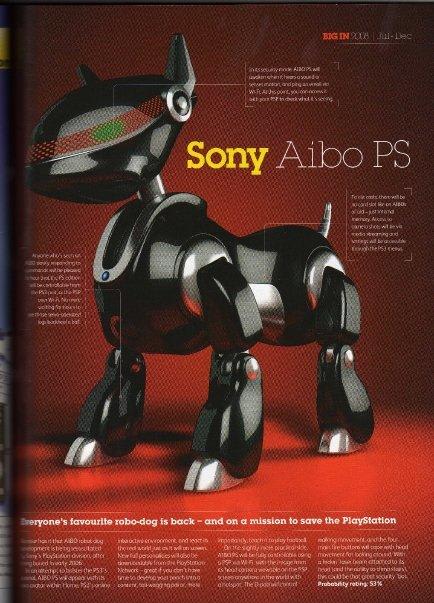 You heard that right, folks. Supposedly, AIBO is back... with a vengeance. According to rumors, the feisty-but-killed robo-dog from Sony is making a comeback with a new paintjob and whole slew of fresh features. First and foremost, the re-upped model will be tailored to interface wirelessly with your PSP and PS3, will have a built in headcam which utilizes a motion sensor and facial recognition, and can stream its POV video over WiFi to your system. In addition, you'll apparently get to remotely trigger the bot with your handheld and control its movements, plus you can set it to "guard" your house (though we're pretty sure most enterprising burglars will just turn the little dude on its side if provoked). Of course, right now this is speculation -- Stuff Magazine's piece on the subject (above) gives the rumored bot a 53-percent chance of becoming a reality -- but there certainly seems to be some meat behind these murmurs. C'mon Sony -- the pup deserves a second chance.

[Thanks to everyone who sent this in]
In this article: aibo, aibo ps, AiboPs, canine, dog, dogs, ps3, psp, qrio, remote access, RemoteAccess, robot dog, RobotDog, sony
All products recommended by Engadget are selected by our editorial team, independent of our parent company. Some of our stories include affiliate links. If you buy something through one of these links, we may earn an affiliate commission.
Share
Tweet
Share