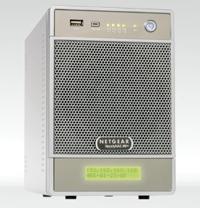 That Infrant acquisition sure looks like it's going well for NetGear, which just announced five more ReadyNAS storage devices. The desktop ReadyNAS NV+ line (pictured) gets the big expansion, with new 1.5TB, 2TB, 3TB, and 4TB models, but you rackmountin' fools out there are also getting a little love with the new 4TB ReadyNAS 1100. All the units sport the same Gigabit Ethernet connectivity, RAID 0 / 1 / 5 support (as well as NetGear's proprietary X-RAID system), and hot-swap support as always, but NetGear has improved the management apps and added support for USB drive sharing as well. Pricing starts at $1099, and it looks like the new models are live on NetGear's site now.

In this article: 1100, netgear, nv, readynas, readynas 1100, readynas nv, Readynas1100, ReadynasNv
All products recommended by Engadget are selected by our editorial team, independent of our parent company. Some of our stories include affiliate links. If you buy something through one of these links, we may earn an affiliate commission.
Share
Tweet
Share