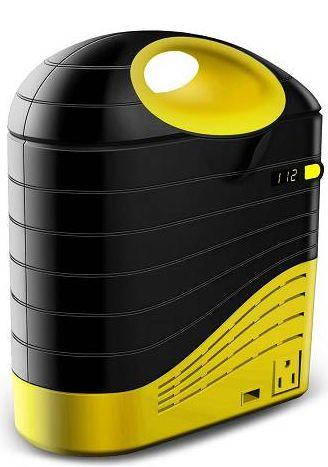 While still quite a ways away from our ideal method of drawing power directly from tap water, the new HydroPak generator from Millennium Cell and Horizon Fuel Cell at least trumps those heavy, dirty, traditional models in both cleanliness and efficiency. As we first heard a few months back, this water-activated, fuel cell-based "portable power product" uses $20 disposable cartridges to provide "enough energy to recharge an average notebook computer 8 to 10 times" or "operate low power devices such as portable lights, notebook computers, portable televisions and ad hoc communications networks for more than 14 continuous hours," via AC outlet or dual USB jacks. Also on display at CES alongside the $400 unit will be a smaller version called the HydroPak Mini, a prototype device designed to juice up gadgets such as cellphones or gaming systems.

In this article: CES, ces 2008, Ces2008, energy, fuel cells, FuelCells, generator, horizon fuel cell, HorizonFuelCell, hydropak, millenium cell, MilleniumCell, portable power, PortablePower, usb
All products recommended by Engadget are selected by our editorial team, independent of our parent company. Some of our stories include affiliate links. If you buy something through one of these links, we may earn an affiliate commission.
Share
Tweet
Share