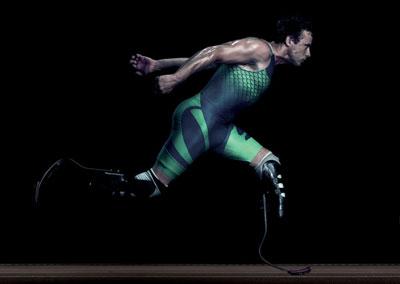 Oscar Pistorius, a double-amputee sprinter, has been denied a shot at the Olympics... for being too fast. The runner -- who uses carbon-fiber, prosthetic feet -- was reviewed by the International Association of Athletics Federations (or IAAF), a review which found the combination of man and machine to be too much for its purely human competitors. According to the IAAF report, the "mechanical advantage of the blade in relation to the healthy ankle joint of an able bodied athlete is higher than 30-percent." Additionally, Pistorius uses 25-percent less energy than average runners due to the artificial limbs, therefore giving him an unfair advantage on the track... or so they say. Oscar is expected to appeal the decision, saying a lack of variables explored by the single scientific study calls for deeper investigation into the matter. Our suggestion? Prosthetic legs for all!

[Via Medgadget]
In this article: iaaf, International Association of Athletics Federations, InternationalAssociationOfAthleticsFederations, olympics, oscar pistorius, OscarPistorius, prosthesis, prosthetic feet, prosthetic limbs, ProstheticFeet, ProstheticLimbs
All products recommended by Engadget are selected by our editorial team, independent of our parent company. Some of our stories include affiliate links. If you buy something through one of these links, we may earn an affiliate commission.
Share
Tweet
Share