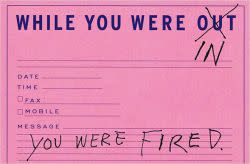 Well, not the very top -- give the guy a chance, will ya! -- but it's clear that heads are already starting to roll at Sprint Nextel following last week's disastrous report of subscriber churn, with the company's chief financial officer, chief marketing officer, and president of sales and distribution effectively getting the boot as of tomorrow. In respective order, Paul Saleh, Tim Kelly, and Mark Angelino will all be "stepping down" on Friday, according to the Wall Street Journal (subscription required) -- the first casualties of a planned 4,000 head count reduction. CFO Saleh is getting replaced in the interim by Senior Vice President and Controller William Arendt, while the other two positions will be temporarily filled by unnamed executives. Sprint lost 639,000 valuable postpaid customers in the fourth quarter, and taking a look at our decidedly unscientific poll may give you some idea why.

In this article: layoffs, sprint, sprint nextel, SprintNextel, telecom
All products recommended by Engadget are selected by our editorial team, independent of our parent company. Some of our stories include affiliate links. If you buy something through one of these links, we may earn an affiliate commission.
Share
Tweet
Share