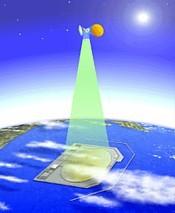 We've seen some pretty out there solar installations, but JAXA, the Japanese space agency, is about to get really far out with its latest project: a space-based solar array that beams power back to Earth. The agency is set to begin testing on the microwave power transmission system on February 20th, with an attempt to beam enough power over the 2.4GHz band to power a household heater at 50 meters (164 feet). That's certainly not the sort of large-scale sci-fi power system we were hoping for, but fret not -- if the tests are successful, JAXA's plan is to eventually launch a constellation of solar satellites, each beaming power to a 1.8-mile wide receiving station that'll produce 1 gigawatt of electricity and power 500,000 homes.

In this article: japanese space agency, JapaneseSpaceAgency, jaxa, solar, solar power, SolarPower, space
All products recommended by Engadget are selected by our editorial team, independent of our parent company. Some of our stories include affiliate links. If you buy something through one of these links, we may earn an affiliate commission.
Share
Tweet
Share