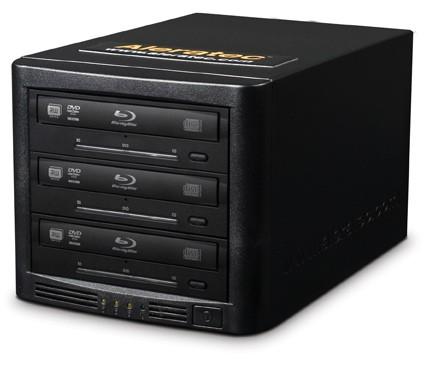 Blu-ray duplication systems have been on the block for a good while now, but apparently, Aleratec's flavor does something that none of the other cool kids can even dream of: it supports LightScribe. The 1:3 Copy Cruiser Blu LS houses a trio of LightScribe-enabled SATA Blu-ray burners that can toast BD-Rs at 6x as well as vanilla DVDs and CDs at much higher speeds. You'll even find a built-in eSATA connector and a dual channel eSATA host adapter bundled in for those who need one. Here's the rough part -- this critter will set you back a staggering $3,199, so you best be making some serious coin on whatever you're duplicating for this to be even close to a sound investment.
In this article: 1:3 Copy Cruiser Blu LS, 1:3CopyCruiserBluLs, aleratec, blu ray, blu-ray, bluray, disc copier, disc publisher, DiscCopier, DiscPublisher, duplication, duplicator, hd, lightscribe, others, recorders
All products recommended by Engadget are selected by our editorial team, independent of our parent company. Some of our stories include affiliate links. If you buy something through one of these links, we may earn an affiliate commission.
Share
Tweet
Share