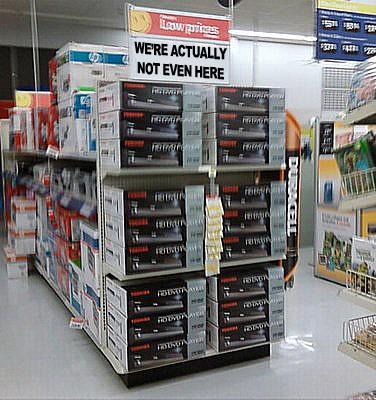 With HD DVD, things are just going from bad, to really bad, to worse, to car-crash-you-can't-stop-looking-at. You can file this one under that latter category, as Wal-Mart has officially announced its intentions to stop stocking HD DVD players and movies by June. According to reports, the retailer came to the decision after Netflix and Best Buy made announcements concerning their position in the HD format war. Susan Chronister of Wal-Mart wrote on the company's blog, "By June Wal-Mart will only be carrying Blu-ray movies and hardware machines, and of course standard-def movies, DVD players, and up-convert players." Susan went on to deliver what we consider a total burn by adding, "if you bought the HD [DVD] player like me, I'd retire it to the bedroom, kid's playroom, or give it to your parents to play their John Wayne standard-def movies, and make space for a BD player." Look, we're not gonna say that this is it for HD DVD, but... uh, it doesn't look real great.

[Thanks to everyone who sent this in]
In this article: blu ray, blu-ray, BluRay, breaking news, BreakingNews, discontinue, format war, FormatWar, hd dvd, HdDvd, hdtv, wal mart, wal-mart, WalMart
All products recommended by Engadget are selected by our editorial team, independent of our parent company. Some of our stories include affiliate links. If you buy something through one of these links, we may earn an affiliate commission.
Share
Tweet
Share