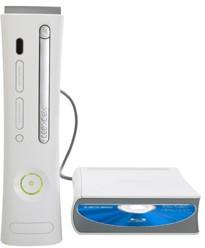 Two years and 1 month ago today we saw the kibosh come down on the Xbox 360 Blu-ray player rumor. This morning it returns with the prospect of a Microsoft player as early as May. According to Smarthouse, their "insiders at Microsoft" claim that a standalone Blu-ray player is already working in-house. With the appropriate approvals it could be on sale within 3 months. A 360 with built-in Blu-ray is also being worked on although the possibility of moving it out to retail is less clear with HD downloads on the horizon. Not that any of this is unexpected given the circumstances. We never expected Microsoft to go down with the HD DVD ship -- they're just passengers on this ill-fated voyage, not the captains.

In this article: blu-ray, hd dvd, HdDvd, hdtv, microsoft, rumor, xbox, xbox 360, Xbox360
All products recommended by Engadget are selected by our editorial team, independent of our parent company. Some of our stories include affiliate links. If you buy something through one of these links, we may earn an affiliate commission.
Share
Tweet
Share