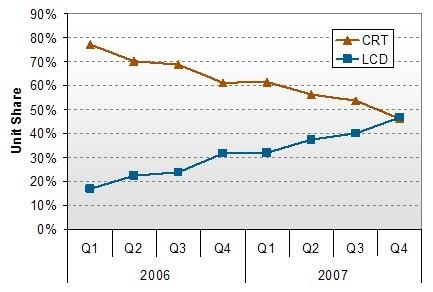 Just days after Sony vaulted to the top of North American LCD sales charts, DisplaySearch is now reporting that worldwide shipments of LCD TVs have overtaken CRT TVs for the first time in the history of the universe. More specifically, LCD TV sales rose some 56-percent year over year, and 47-percent of the world's TV market is now held by said technology. Reportedly, the transition from CRT to LCD was seen as a logical one, considering that it could extend down to sizes smaller than 20-inches and satisfy desires for large-screen sets. We know you're just itching to go diving head first into more numbers on the subject, so feel free to toss on those wire-rimmed glasses and hit the read link below.

[Via TGDaily]
In this article: business, crt, DisplaySearch, hd, industry, lcd, market share, MarketShare, research, sales, shipment
All products recommended by Engadget are selected by our editorial team, independent of our parent company. Some of our stories include affiliate links. If you buy something through one of these links, we may earn an affiliate commission.
Share
Tweet
Share