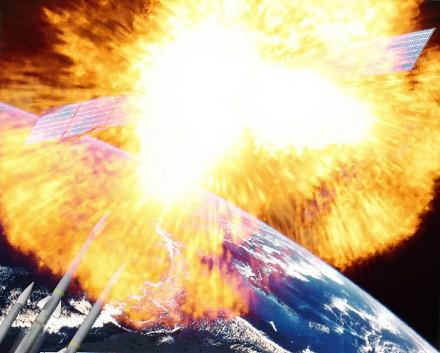 Just like the Navy told us, they shot that nasty satellite out of the sky with the kind of laser-like precision they've been claiming they're capable of for years. At right around 10:30 this evening, expensive missiles were fired from the deck of the USS Lake Erie, traveling into space at an excess of 5,000mph, which then slammed into the Alien / zombie-juice / Russian controlled satellite (which itself was traveling at 17,000mph). Right now details are still sketchy on just how much damage was done to the object, but word on the street (aka, from the Navy) is that just about any hit to the satellite would put it out of our misery, due to the speed and trajectory at which it's traveling. The story is still developing, so if any of the zombie spore does manage to reach Earth and spark an undead holocaust, we'll be the first to let you know.
In this article: aliens, breaking news, BreakingNews, navy, satellite, shoot down, ShootDown, shot down, ShotDown, spy satellite, SpySatellite, success, uss lake erie, UssLakeErie, zombies
All products recommended by Engadget are selected by our editorial team, independent of our parent company. Some of our stories include affiliate links. If you buy something through one of these links, we may earn an affiliate commission.
Share
Tweet
Share