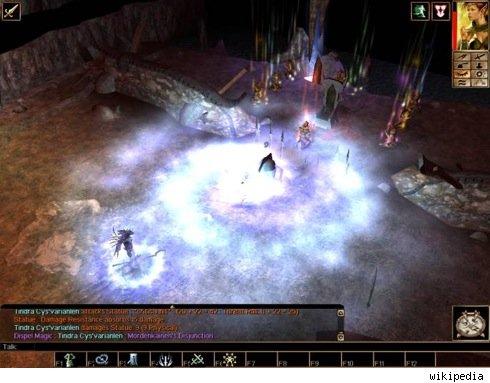 Earlier today Derek French, a member of the Live Team at BioWare, gave a talk on the process of supporting the company's hit roleplaying games. He explained what exactly a Live team is, and marked some of the BioWare success stories that can be tracked back to that group; initiatives like the Premium modules were developed entirely in this little-known area of the company. He also hinted at some fascinating future plans for the team, like the potential of an interactive website not unlike the World of Warcraft 'Armory' site.

In the process of talking about the team, French offhandedly mentioned the end of an era. The upcoming patch to the original Neverwinter Nights game, 1.69, will be the last the company releases. After seven years of tweaks and corrections, official support will be ending for this venerable game title. Beta patch notes for the 1.69 patch are available on the official forums. Though this is hardly news for the vibrant community still playing this game, it's worth noting the passage of one of BioWare's landmark titles.

Read on for more on the BioWare Live team - including a lesson in why you should never post to forums angry.

French began his presentation by explaining the origins of the BioWare Live team (BLT). The team was born prior to the launch of Neverwinter Nights as a tools and support team for the game. While these teams are traditionally reserved for Massive games, Ray and Greg were convinced they'd be a great pillar for the title to rest on after release. There were just a handful of people associated with the group initially, which was tasked with doing patches and support for the released game. Meanwhile the dev team would be isolated to work on new content for future expansions.

French offered that "We didn't really know what we couldn't do." Their relative ignorance allowed them a great deal of flexibility, enabling them to accomplish feats they should have thought twice about even taking on. Forums, for example, ended up being developed entirely in-house. They also worked up their own CD key server system. You could register your CD key via the forums, as a result, which allowed a 'game-owners-only' area to develop. Their "only" mistake was to allow people to have multiple accounts per email address. This is a problem they're still trying to resolve. The biggest issue there is statistical analysis - there's no possibility of data-mining. "It also messes things up when a large multinational company buys you out."

Moderation is handled by paid employees and volunteers in a mix. "If you ask to moderate, you're denied." People that want that kind of power should never be given it. If the posters are polite and well thought-out, they're considered for the program. Twenty of these folks cover the time zones, and it's worked really well. There are still requirements to restrict some elements of posting (amount, swearing).

They developed the ability to make exceptions for in-game words that would trip up the filter (cockatrice, Calimshite). They're able to do selective blocking of spam content as well. Point values were assigned: each infraction in a potential post earned you a point. 10 points equals a block, stopping the player from posting. Player got around that by just editing their posts to dodge the filters. They then moved to # of points = amount of hours temporarily banned. He shares an anecdote of an angry aussie who banned himself for 700 hours prior to the release of the AU version of NWN.

Moderation and control allows for a thriving community to develop. They have no problem with criticism, as long as it's done in a respectful manner. They looked forward for a few years of support and updating to the game - updates needed to be built in. They created their own patching application to compare between the actual files and the current files. Even in an auto-update situation (like an MMO), he advises the option of a manual updating system.

The launch of NWN was unlike anything he'd ever experienced. It was the craziest two weeks ever, with almost everyone in the team on the forums pitching in. After that point, the dev team took a break and the live team took over. They were actually the ones that directed the development of the Linux and a Mac versions of the game.

They then began working on bug fixing, triaging the worst problems and familiarizing themselves with the code. Soon they were making their own fixes; supporting the players as best they could. One of the things they identified was the lack of creative modules, and they knew what Aurora could do. French took his developer off the leash, and let him make a bunch of crazy adventures to show off the toolset.

Every time they thought that the community couldn't accomplish something (adding new monsters, adding new tiles) they were proven wrong. They worked to add more robust tools to Aurora, and tweaked endlessly. Multiple 'hackpacks', a new database layer, numerous features were added as a result of player feedback. Almost 20 full updates were released over NWN's lifespan.

The server browser was a problem, and it initially didn't work for a number of people. Forums were used to create guilds and register characters to play. Neverwinter Connections actually came up with a third-party option, mimicking the live team's work. The CD key system allowed them to troubleshoot issues, like a SecureROM issue (that eventually lead to removing security checks all together.) The community also created a few problems. Players were inspired to create their own tools, resulting in lots of errors and the need to allow for outside data. They tweaked the game to make it less stable overall, but ultimately more useful for the community.

The Live team began work on Knights of the Old Republic by lending some programmers to the PC port team. They decided to use the updater from NWN for KOTOR, but realized they'd been making a mistake. Anytime they'd made an installer or an autorunner they'd been making the same errors over and over by handing the job to a junior programmer; the live team took over the non-game tools, and now powerful technologies run these utilities. The installer is the first experience a player has with your game - it's not something you want to leave for the end. If you delay it, you're setting your players up to have a bad first experience with your title.

There were only three updates for KOTOR, and the first NWN game was winding down. The Live community wanted to stay busy, though, and came up with the idea of premium modules. To secure the additional content they forced players to authenticate every time with their CD key - not ideal, and something they'll try to avoid in the future. They made about five modules over the course of the project, and even squeaked an extra past Atari (Wyvern King).

Jade Empire was the first time that they used a new publisher, developed a title externally, and sold a title through the BioWare store. The Live team worked on developing the systems for the internal store. They ended up doing a midnight release, with a few minor bumps, but overall it was a good experience. They're now working to support Mass Effect on the PC, which is also being externally developed. They're planning to sell it via the BioWare store and "other places", and are reusing their pre-existing autorun and installer utilities.

In the future they're planning to embed themselves in the dev team. That means Dragon Age, where they'll share the knowledge they've developed in the past. They're looking to the RPG-like CoD4 systems and the WoW armory for inspiration of future projects - possible tie-ins to Dragon Age and other products. Having a Live team "isn't for everybody". It's good if you're doing downloadable content, but otherwise it isn't a revenue generating arm. You can have it be standalone (as it was for many years at BioWare) or embedded like they'll be moving to.

If you're unsure of the level of support the publisher or dev team can support, that's the perfect area for a live team to develop. This is especially true for new patches. If quality for patching or tools doesn't meet expectations, that's also a key area for growth. Live Teams can also work on post-release content (DLC, etc.) Third-party development is also a great place to liase with a Live team - connecting with external groups.

Roles in the group should include: a lead, a community manager, developers, and perhaps a tools/database guy. Depends on the needs of your team. Community managers are key, but require understanding of both customers and the team. Not a technical person per se, but a good source of sanity checks and feedback.

BioWare community has 3.8 million members, and has a long history of developing successful relationships between BioWare and the players. NWN is going to get a final release (1.69) to completely close out that community. That will cap off a five year history of the game and shut down the project. The servers will stay up to support the game, but Neverwinter Nights will no longer be an actively bugfixed game.

In this article: bioware, featured, GDC, gdc08, live-team, neverwinter-nights, nwn, patch, PC, support
All products recommended by Engadget are selected by our editorial team, independent of our parent company. Some of our stories include affiliate links. If you buy something through one of these links, we may earn an affiliate commission.
Share
Tweet
Share