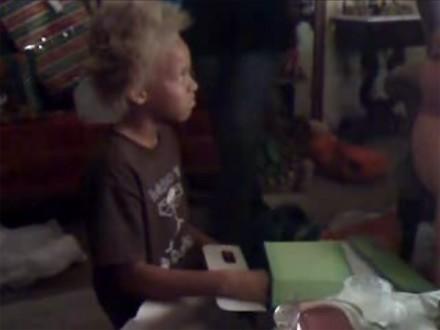 When you were a kid did your parents ever do anything mean to you for their own amusement? Whatever it was, something tells us it wasn't as evil as what Jonathan's (above) family did on Christmas morning, having him unwrap an empty Xbox box with some shirts inside -- while on video, mind you -- and then everyone laughing at him when he got upset and cried over being hoodwinked. For the love of all that is holy in the gadget-loving world, that is so wrong. Despite the fact his family told Jonathan multiple times in the video, "C'mon, you know we can't afford an Xbox!", the kid's shining example of an older brother (who uploaded the video) claims that they actually did get him the console, and that he'd eventually upload the video of the "real" unwrapping. He never did. Right.

Jonathan, you out there? Screw those people, they clearly don't understand what it is to be a kid and to want an awesome gadget so badly you can taste it. We've been there our whole lives. Since, as a publication, we can't just adopt you and raise you as our own, I will personally send you an Xbox 360 and some games -- but only on the condition that you swear to you'll never let your douchebag family play with it. Hit me up at engadget at gmail dotcom, make sure you can identify yourself so I know I've got the right person.

Update: We've been flooded with email from well-meaning geeks and even Microsoft; just about everyone wants to help us hook up Jonathan. We totally appreciate the sentiment, but we've got this covered. We think we've gotten in touch with his family (who let us know he never got an Xbox, and the whole thing really was a prank on the poor kid); once we know for sure we have the right people we'll post again.

In this article: microsoft, xbox 360, Xbox360
All products recommended by Engadget are selected by our editorial team, independent of our parent company. Some of our stories include affiliate links. If you buy something through one of these links, we may earn an affiliate commission.
Share
Tweet
Share