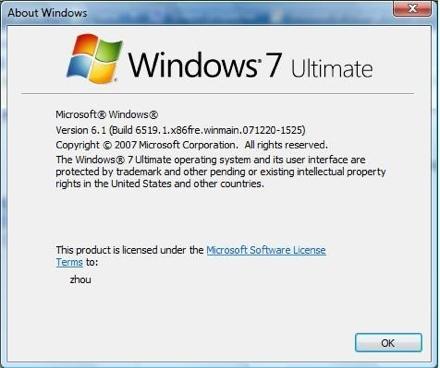 If your pants / panties were in a "bunch" upon hearing news that Windows 7 would be headed into your ever-loving arms "next year," you might just want to hold off on those party invites for a little bit. Sure, Bill Gates just happened to mention that we'd see a new version of the OS "Sometime in the next year or so," but it's looking like that "or so" makes a world of difference. Microsoft wants to chill everyone out with the somber news that its got no plans to introduce Windows 7 any earlier than January 2010 (three years from the launch of Vista), and reassure us that crazy old Gates may have just been talkin' developer speak. "As is standard with the release of a new product, we will be releasing early builds of Windows 7 prior to its general availability as a means to gain tester feedback," a spokesman for Microsoft said, downplaying Gates' statement. Of course, this means that XP's cutoff will suddenly move even further down the line, which makes us wonder what the point of setting that June 2010 date was in the first place. Why are you toying with us like this, Microsoft?

[Thanks, Tony]
In this article: bill gates, BillGates, microsoft, release date, ReleaseDate, vista, windows 7, Windows7, xp
All products recommended by Engadget are selected by our editorial team, independent of our parent company. Some of our stories include affiliate links. If you buy something through one of these links, we may earn an affiliate commission.
Share
Tweet
Share