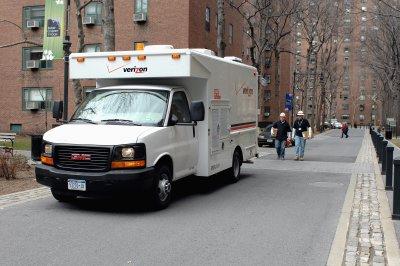 While some have said that Verizon is tiptoeing around downtown Boston, the carrier has just made clear that said scenario definitely isn't happening in the Big Apple. Believe it or not, Verizon has just filed an application to bring its FiOS TV service to all five boroughs (yes, Manhattan too) of New York City. More amazingly, the provider says that it hopes to "reach every neighborhood" in the city within a six-year time frame, though the initial go-live date is expected to occur "later this year." Make no mistake -- Verizon is well aware of Time Warner Cable / Cablevision's grasp in the city, and launching a fiber-based alternative could certainly turn things upside-down. Beyond that, we also hear of plans to dish out 150 HD channels by the year's end, and if the proposal is approved, Verizon will too provide a fiber-optic institutional network (INET) to "support the City's public safety needs." Check out the read link for lots more details, and keep those fingers crossed.

In this article: brookyln, expansion, fiber, hd, manhattan, new york, new york city, NewYork, NewYorkCity, ny, queens, verizon
All products recommended by Engadget are selected by our editorial team, independent of our parent company. Some of our stories include affiliate links. If you buy something through one of these links, we may earn an affiliate commission.
Share
Tweet
Share