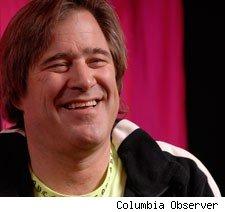 EA co-founder and Chief Creative Officer (and mountain biker), William "Bing" Gordon, is leaving the monolithic publisher to join Silicon Valley venture capital firm, Kleiner Perkins Caufield & Byers (KPCB) as a Partner. Gordon, who has been with EA for 25 years, won't be severing all ties before he goes, as he'll occasionally drop by to "lead periodic workshops on innovation with EA Studio leaders" under his fancy new title, Chief Creative Officer Emeritus.

Over at KPCB, he'll be relied on to "provide his unique insight and expertise to entrepreneurs in consumer technologies" as of June 9, 2008. KPCB Partner John Doerr notes, "His success with dynamic and engaging digital entertainment and consumer media is invaluable for innovators in mobility, social networks, gaming and entertainment – indeed, in any area that interacts directly with consumers."

As you've likely played at least one of the numerous franchises Gordon has been critically involved with -- Madden NFL, The Sims, Need for Speed, to name a few -- you may want to see what he has to share in a Q&A with Newsweek's N'Gai Croal. "As much as anything else, after 25 years at EA, I'm ready to be a forty-year old," says Gordon.

They grow up so fast, don't they?

Read -- Announcement
Read -- Q&A
In this article: Bing, Bing-Gordon, BreakingNews, EA, Electronic-Arts, KPCB, William-Gordon
All products recommended by Engadget are selected by our editorial team, independent of our parent company. Some of our stories include affiliate links. If you buy something through one of these links, we may earn an affiliate commission.
Share
Tweet
Share