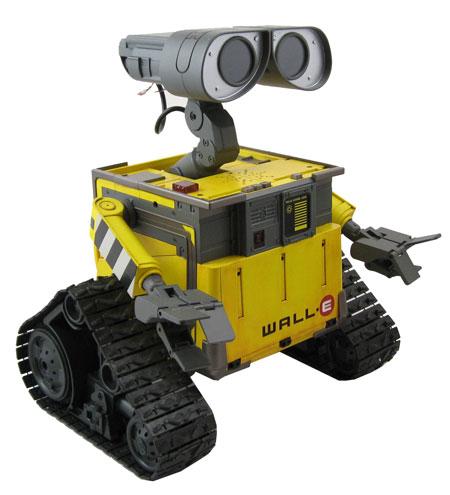 Need some irony with your angst-battered diet this morning? Swell, try some of this. Disney and Pixar are set to release their latest animated blockbuster, WALL-E, this summer. The premise of the film finds WALL-E (Waste Allocation Load Lifter - Earth-Class) cleaning up the Earth's trash after rampant, unchecked consumerism made the planet uninhabitable. So how do they promote the film? You got it, they launch a new line of plastic WALL-E robots developed in partnership with Thinkway Toys which no child could possibly live without. Ultimate WALL-E will list for $190 when launched sometime this summer and feature 10 motors, a remote control, and plenty of sensors to avoid obstacles, respond to touch, and feel the mocking satire of its own existence. The bot will be joined by a $25 iDance WALL-E (think i-Species) and a $40 WowWee FlyTech Tinker Bell when they make their May 29th debut in San Mateo at the Maker Faire.
In this article: disney, flytech, flytech tinkerbell, FlytechTinkerbell, idance wall-e, IdanceWall-e, maker faire, MakerFaire, tinker bell, TinkerBell, wall-e, wowwee
All products recommended by Engadget are selected by our editorial team, independent of our parent company. Some of our stories include affiliate links. If you buy something through one of these links, we may earn an affiliate commission.
Share
Tweet
Share