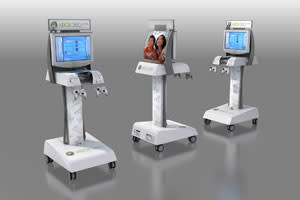 Here's your heartwarming story for the day. Microsoft has teamed up with Companions in Courage in order to bring "hundreds" of Xbox 360 kiosks to children's hospitals across the nation, and the gaming stations have already been installed at Morgan Stanley Children's Hospital of New York-Presbyterian, Children's Hospital & Regional Medical Center of Seattle and the Children's Hospital of Orange County, California. The customized units are "hospital-friendly" and come pre-loaded with a variety of E and E10+ rated games, Y-rated television programs, G-rated movies and the Xbox Live headset / Vision camera in order for gamers to play online. Speaking of, each kiosk is wired to a private Live network which "allows hospitalized children across the country to play games and chat" with each other. There's no word on where the stations are slated to arrive outside of the three venues already mentioned, but those interested in broadening the reach of the endeavor can feel free to donate to the cause.

[Via OhGizmo]
In this article: children, Companions in Courage, CompanionsInCourage, disabled, handicap, handicapped, hospital, kiosk, microsoft, non-profit, partner, partnership, Xbox 360, xbox live, Xbox360, XboxLive
All products recommended by Engadget are selected by our editorial team, independent of our parent company. Some of our stories include affiliate links. If you buy something through one of these links, we may earn an affiliate commission.
Share
Tweet
Share