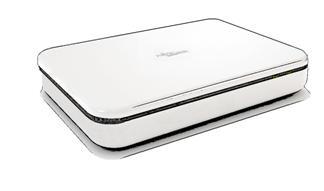 We've heard plenty of promises of external graphics solutions for laptops in the past, and it looks like Fujitsu Siemens is now about to join the party as well, with it reportedly set to debut its AMILO GraphicBooster in the "next couple of weeks." That word apparently comes from a leaked presentation from the company which, unfortunately, doesn't include all the details we'd like, but does at least reveal a few tantalizing bits of information. As Notebook Review reports, the device is based on ATI XGP technology, which supposedly provides a 4.7X boost in graphics performance over a standard Fujitsu AMILO laptop (it's not clear if they're talking about integrated graphics or not), or a score of about 8,000 in 3DMark06 benchmarks. What's more, the device will also apparently let you connect up to three external displays to your laptop, with both DVI-D and HDMI ports provided. Of course, there's no word on pricing or availability, which could lead one to suspect that this is yet another device we'll still be hearing about a year from now -- if you're the cynical type, that is.

[Thanks, Master_P]
In this article: amilo, amilo graphicbooster, AmiloGraphicbooster, external graphics, ExternalGraphics, fujitsu, fujitsu siemens, FujitsuSiemens
All products recommended by Engadget are selected by our editorial team, independent of our parent company. Some of our stories include affiliate links. If you buy something through one of these links, we may earn an affiliate commission.
Share
Tweet
Share