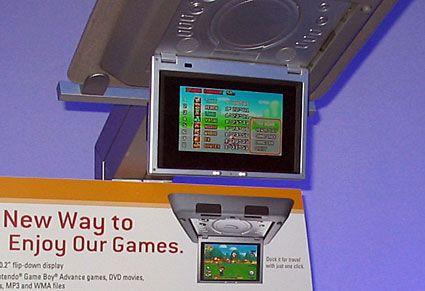 Those of you who like all-in-one devices might be familiar with Visteon's Dockable Entertainment system. Even though we see this as more of a "we like the idea but wouldn't actually buy one" item, this portable player supports Game Boy Advance games, as well as DVDs and music. Therefore, it's the perfect device for people who were looking for a GBA-meets-music-player-meets-DVD-player to keep them (or their children) busy on long drives.

This is all old news and exposition, though. The interesting part is that Visteon told GamerTell in an interview that they hope to come out with two new Dockable Entertainment systems, one featuring the Wii and the other the DS. These plans are nowhere near definite, but the fact that Visteon is looking into them is enough to get us excited. Granted, a portable Wii device that can also play DVDs and CDs is the more appealing of the two, but a DS version isn't too shabby of an idea, either. Of course, the potential pricing on these devices has us nervous, considering that the GBA version cost a cool $1,200 with installation when it came out.
In this article: cd, dockable-entertainment, dvd, mp3, visteon, wii, wma
All products recommended by Engadget are selected by our editorial team, independent of our parent company. Some of our stories include affiliate links. If you buy something through one of these links, we may earn an affiliate commission.
Share
Tweet
Share