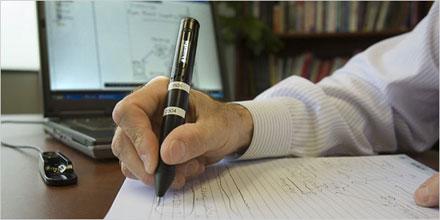 If the pen truly is mightier than the sword, Livescribe's Pulse smartpen ($149 with 1GB of flash memory, $199 with 2GB) may be able to take out a tank at 50 meters. Arguably the most technologically advanced writing instrument not intended for killing a Bond villain, the Pulse includes an infrared camera (for recording text), dual microphones, a speaker, a headphone jack, and an OLED display that can even play back short "movies" (animations synced with sound). And it manages to pack it all in a pen size that, while still a bit thick, is relatively comfortable and thinner than its closest technological ancestor, the now-discontinued Logitech io2.

Using its noise-canceling microphones and ink recognition system, the Pulse can be used to either take written notes that are uploaded to the PC, or record audio. But its greatest advance for note-taking over previous smartpen systems such as the io2 is the ability to synchronize written notes with audio. Simply put the pen into "Paper Replay" mode and tap on some text to hear what was being said as you scribbled. The result is the next best thing to real-time transcription. It can be used to check what may be an unclear or hastily scribbled note, focus on commentary while the pen captures the content, or create or copy a diagram while it is explained via audio.

But first, whatever is being written will have to be done so on paper designed explicitly for the pen. Like previous products that use Anoto technology, the Pulse needs smart "dot paper" to make transcription work. Without a doubt, this requirement will be a deal-killer for many, and limit the Pulse's everyday utility for some time to come. In contrast, simpler products such as the IOGear Mobile Digital Scribe uses ultrasound to track a pen's position and can be used on any paper (and the pens in such systems are smaller as well). To make dot paper more readily accessible, though, Livescribe will offer a template that should allow many customers to print their own dot paper at home. And dot paper enables the Pulse to pull off some pretty slick feats. Read on.

Livescribe notebooks include a variety of controls at the bottom of the page, including areas that can create and navigate bookmarks in the audio, and control playback speed and volume. Also included is a four-arrow control that must be used to navigate the Pulse's functions. Livescribe makes the printed control available on a sheath used to protect the Pulse, but it would be more convenient to have an integrated scroll wheel or some other means of navigating the Pulse's user interface without having to use a printed surface.

Once "sessions" -- which can consist of written notes, audio or both -- are recorded, they are transferred to a PC using a docking cradle. The Windows-only Livescribe Desktop software (a Mac version is slated for development) can be used to play back recorded audio or audio-synchronized note-taking sessions, search for text in the notes, or copy whole pages to the clipboard. Unfortunately, there is no character recognition function to turn written words into editable text, although such software has been a mixed bag in previous smartpen offerings. Livescribe Desktop also cannot save pages as PDF, but there are several quality free PDF print drivers to work around that. And the software facilitates uploading files to Livescribe's site, where they can be shared as a PDF or Flash movie.

In giving each Livescribe owner 250MB online for storing Livescribe documents and creating a community around them, the company has in essence created a new form of media that it has dubbed "pencasts". One of the more humorous ones on the site parodies the thought process of George Lucas in 1976 as he noodles different concepts for Star Wars or, as he previously considers naming it in the pencast, "Space Conflagration." As the author doodles, he waxes, "I have a vision: flashlight plus sword equals bags of cash."

As impressive as the Pulse's note-taking function is, it is merely one of what Livescribe aims to turn into a whole ecosystem of pen-based applications, Livescribe includes some intriguing demos such as one that allows you to draw your own playable piano as well as one that can recognize a few words and display the translation for them in a number of languages on the device's display. The company plans to make a range of content and software development tools available to appeal to different kinds of developers, including Java coders.

Applications and new forms of smart printed content will be sold through the Livescribe web site. One potential application example of such content is Livescribe CEO Jim Maggraff's business card, which is printed on dot paper. Write something on the back on the card and when you dock the pen what you wrote can be e-mailed to him. Livescribe plans to roll out this functionality later this year.

Creating a system of smart content and applications around a smartpen takes a page from LeapFrog's successful Fly franchise, which has been the most successful of the bunch. The next Switched On will explore whether Livescribe has done enough to translate that success into a tool for adults in a slow-to-develop market.

Ross Rubin is director of industry analysis for consumer technology at market research and analysis firm The NPD Group. Views expressed in Switched On are his own.
In this article: Anoto, features, Livescribe, Pulse, smartpen, Switched On, SwitchedOn
All products recommended by Engadget are selected by our editorial team, independent of our parent company. Some of our stories include affiliate links. If you buy something through one of these links, we may earn an affiliate commission.
Share
Tweet
Share