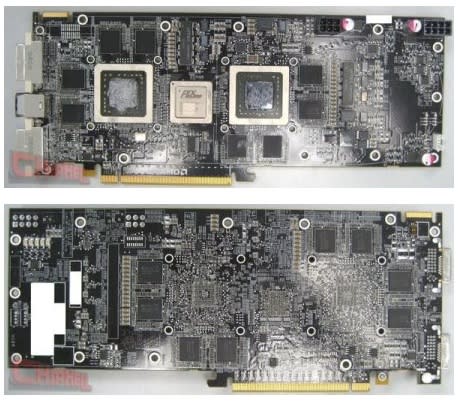 Is this the Radeon card destined to leapfrog NVIDIA's performance leading GTX 200 series? We'll know in August (or soon thereafter), that's the rumored release date for AMD's Radeon HD 4870 X2 graphics card. As the X2 name implies, the card packs a pair of RV770-based GPUs and should be ready to sample with 2GB (!) of that "world's fastest" GDDR5 memory by the end of this month. It's worth noting that the leaked images show a total of 1GB of GDDR5 (16 Qimonda GDDR5 chips) on that black PCB. AMD will then make the 4870 X2 (RV770XT) cards available to its partners in mid-August, hitting retail soon after for an estimated $499 according to sources over at DigiTimes.

Read -- Leaked images
Read -- August launch
In this article: 4870 x2, 4870X2, amd, ati, radeon, Radeon HD 4870 X2, RadeonHd4870X2, rumor, rv770
All products recommended by Engadget are selected by our editorial team, independent of our parent company. Some of our stories include affiliate links. If you buy something through one of these links, we may earn an affiliate commission.
Share
Tweet
Share