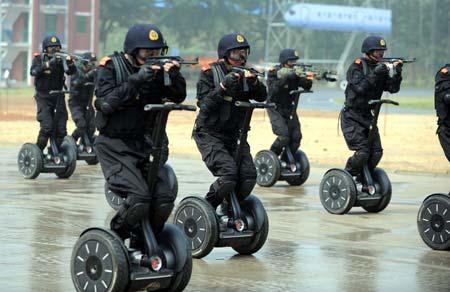 Ah, ha! So, that Chinese S.W.A.T. team we caught ridin' dirty on Segways earlier this week actually had a reason to be carrying on like they were -- they were performing anti-terrorist drills in preparation for security during the 2008 Olympic Games in Beijing. Comically enough, the drill was said to be one of "rapid deployment," though we aren't told how many spills were taken when officers tried to actually maneuver one of these things around, aim at a target, pull a brown bag down around their head and keep it from spontaneously reversing. Just one question guys: what's with the tiny guns?

[Via CNET]
In this article: army, beijing, china, cop, military, Olympics, police, segway, Shangdong, soldier
All products recommended by Engadget are selected by our editorial team, independent of our parent company. Some of our stories include affiliate links. If you buy something through one of these links, we may earn an affiliate commission.
Share
Tweet
Share