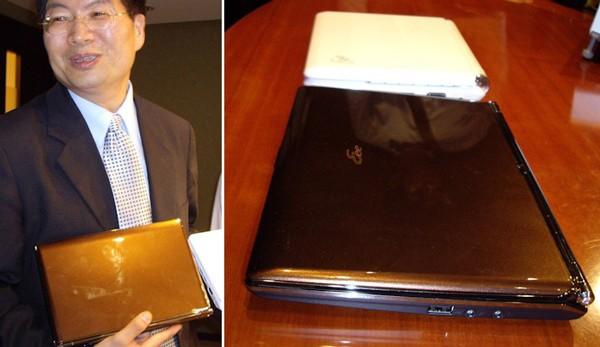 We've already seen the S101 Ultimate Eee PC at the top of ASUS' Eee PC pyramid of implosion. ASUS' prez, Jerry Shen, told us earlier to expect the Atom-based netbooks to ship with a 32GB SSD, 10.2-inch, 16:9 aspect LED backlit display and battery life of about 4-5 hours. Today in Taiwan, he personally revealed the S101 prototype (pictured above next to the Eee PC 901), and it's brown (at least for now) and it's sporting the Eee logo as you'd expect. Interestingly, ASUS has apparently decided to ditch the Eee branding on the S101 when it goes production in mid-September to keep it distinct from the low-cost ultra-portable branding that the Eee PC name is (or at least was) synonymous with -- a move we wholeheartedly support. The S101 will measure in at a tapering 16 ~ 21-mm and weigh less than 1KG. Seems Jerry re-enacted the ol' MacBook Air (4 ~ 19.4-mm thick) trick and pulled the S101 from an envelop to demonstrate its thinness. Played carny tricks aside, the S101 features the same 1.6GHz Atom N270 processor and 945GME chipset found in current gen Eees with prices to range from $699 for the 32GB SSD model on up to $899 for a 40GB SSD (and possibly more). Interesting, to say the least.

[Via iTechNews]
In this article: asus, breaking news, BreakingNews, eee pc, EeePc, netbook, s101, ultra-portable
All products recommended by Engadget are selected by our editorial team, independent of our parent company. Some of our stories include affiliate links. If you buy something through one of these links, we may earn an affiliate commission.
Share
Tweet
Share