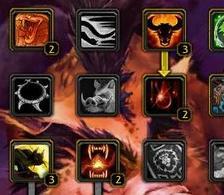 Welcome to another edition of Scattered Shots, the other WoW Insider weekly Hunter column. Daniel Whitcomb is your guest host again this week.

So, we theorized about talented pets a bit quite a few installments of Scattered Shots ago, but now we have the actual trees live and testable on the Wrath Beta, and they seem to be firming up nicely. There's a few promised changes yet to come, such as the removal or lowering of focus costs on many major abilities and talents, and it's still very possible that Blizzard may make changes here and there before live, but I think they're solid enough at this point that we can look at each tree and make some solid predictions about how people will use them and how various talent builds might look.

Ferocity Pets will probably remain the kings of group PvE, for the most part. A Hunter is still all about the DPS in those situations, and thus will want the tree and the pets that will optimize that DPS the most. You can get all of the primary DPS abilities in a non-Beast Mastery build, as seen above, and Avoidance should hopefully be as much survivability as you need as long as your pet doesn't draw aggro, which it shouldn't thanks to free Cower. Bloodthirsty should also mean you'll be spending a lot less on pet food.

As far as specific families go, I expect we'll see a lot of Devilsaurs, since Monstrous Bite appears to be far and away the best damage-causing family ability. For non-Beast Mastery Hunters, The innocuous-looking Moth may actually end up being the most useful DPS pet due to their dependable self-heal and attack power buff -- the 2 minute cooldown does make that buff a lot less useful than it could (perhaps even should) be, though. I could also see lot of Hunters with Wolves bringing out the group utility via the now scaling Furious Howl and Call of the Wild. Hyenas and Cats will likely see a lot of play in PvP, Cats for that lovely stealth, Hyenas because they'll provide some extra ease of kiting with Tendon Rip.

Deviations on this build will probably come mostly in favor of group utility. Heart of the Phoenix should actually be a rather excellent ability now that it is usable instead of automatic, but if you have Improved Revive Pet, it may be worth giving up for the group utility of Call of the Wild, especially since Call of the Wild should be going to free focus in the next build. Of course, if you have Beast Mastery, you can pick up both and grab the extra survivability from Great Stamina as well, which you'll definitely want if you plan to PvP with a Ferocity pet.

I expect that we'll see quite a few of these pets in Arena PvP. With pet resilience off the table, Blood of the Rhino and Great Resistance seem like the only real options to provide more survivability for pets. In addition, Scorpids are a Tenacity pet, and their poison still remains the most dependable way for a drain team Hunter to make sure their Viper Sting isn't dispelled. Crabs may also see some PvP play for their rooting ability.

In PvE, they'll be used for solo and small group tanking mostly. Crocolisks and Bears will especially be nice for tanking small groups. I also expect to see a Worm or two around in group PvE. Acid Spit's armor reduction is apparently very significant (I've heard estimates of 2100 at level 70), and in a melee heavy raid or group, that should easily be worth any personal DPS loss on the part of the Hunter.

Beast Mastery helps this tree quite a bit, even more so than Ferocity. In PvP, you can grab Last Stand or some of the Armor talents for a small bit of extra survivability. In PvE, you can do the same or grab Spiked Collar or Taunt for some extra threat.

Cunning is probably the most confused designation and tree for pets right now. A Cunning pet won't DPS as well as a Ferocity pet or Tank as well as a Tenacity pet, but there's some concern as to whether it will do anything well at all. Is permanent Dash really worth spending 3 talent points on? Owl's Focus' clearcasting looks handy, but it's not as alluring when you realize that it will probably be wasted on a cheap autocast before you notice it's up, and most abilities are getting a greatly lowered focus cost in the next build anyway.

If there's one place where Cunning pets may find a Niche, it's likely in PvP. Cornered is strictly lackluster for PvE, but in PvP, it may equal your pet's survival against being focus fired, thanks to the burst of critical hit chance reduction. In addition, Bullheaded may prove useful for Hunters without Bestial Wrath for getting their pet out of a sticky situation. Finally, Feeding Frenzy could be just the ticket for finishing off targets fleeing for cover. Unfortunately, it's harder to figure out which pet to use in PvP. While Spiders, Silithids, Bats, and Ravagers all have roots or stuns, they're all on very restrictive cooldowns. Still, I expect to see some Hunters experimenting with Cunning PvP as we all hit 80 and return to the Arenas and Battlegrounds in earnest.

In PvE, some Hunters may be drawn to Roar of Recovery as a way to keep up their mana regeneration, or to Feeding Frenzy as a way to get some nice extra damage in on the home stretch against dungeon mobs and bosses. Still, the biggest reason to take a Cunning pet will probably be the family ability. Chimeras and Wind Serpents look the most alluring here, as their family abilities are magic damage and will pierce through armor. Whether it's enough to make their DPS more than a Ferocity pet's remains to be seen, but it may be worth some tests.

The Chimera's Froststorm Breath is hard to analyze right now because it is bugged. Not only is it not slowing the enemy, but a bug with the double magic school ability is causing it hit for massive damage, climbing into the multiple thousands per hit. Once it's fixed and toned down, it may not be as alluring, but not only could the slow be useful for group utility, but the magical nature of the attack should mean it will still do a good amount of damage.

Right now, the trees are starting to look pretty solid, especially Ferocity and Tenacity. After the focus cost reduction next build, most of the final tier abilities should be looking especially worthwhile. Cunning is probably the weakest tree still, but even it could have some applications in the right situation. Hopefully the next build will firm up the few weaknesses and get the trees looking even better for Wrath's release date.

The nice thing about all this is that with our new stable slots and the ease of getting new pets in Wrath, any Hunter should be able to test out a new talent build or family ability with a minimum of difficulty, so the best advice I may be able to give you is to go out, find some animals to tame, and see what tree and family work best for you and your play style. After all, variety is the spice of life, and when it comes to Hunter pets, that variety has never been better realized than in Wrath of the Lich King.