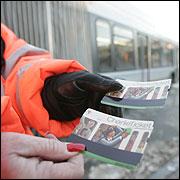 No surprise here, but the kids from MIT were (presumably) right all along. The three students who were muffled just before presenting their case at Defcon have finally been freed; the now-revoked gag order had prevented them from exposing insecurities in the Massachusetts Bay Transportation Authority ticket system, but during the same court setting, the MBTA fessed up and admitted that its current system was indeed vulnerable. Of note, it only confessed that its CharlieTicket system was susceptible to fraud, while simply not acknowledging any flaws in the more popular CharlieCard option. Pish posh -- who here believes it doesn't have dutiful employees working up a fix as we speak?

In this article: black hat, BlackHat, boston, charliecard, court, defcon, gag order, GagOrder, hack, judge, legal, mass transit, MassTransit, mbta, mit, RFID, university
All products recommended by Engadget are selected by our editorial team, independent of our parent company. Some of our stories include affiliate links. If you buy something through one of these links, we may earn an affiliate commission.
Share
Tweet
Share