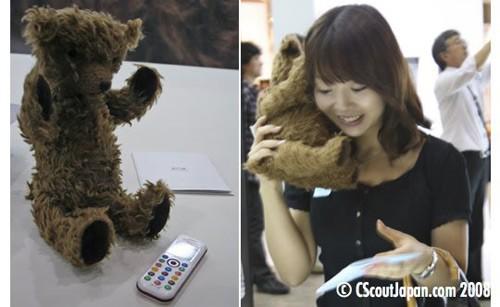 We've seen some bizarre -- bizarre -- handsets in our day, but this one is just too darn cute to call weird. The conceptual Kuma Phone was recently shown off in Japan by Willcom, and according to local reports, the audience in attendance absolutely adored it. The GSM teddy bear, er, mobile can hold up to four speed dial numbers, boasts a built-in vibration function and allows users to answer / terminate calls by "pressing the tail." An accompanying pamphlet suggested that it would run around $500 should it ever hit mass production, which leads us to wonder if they plan on using Boyds / Vermont Teddies or something.

[Via textually]
In this article: bear, bear phone, BearPhone, concept, japan, Kuma Phone, KumaPhone, prototype, teddy bear, teddy bear phone, TeddyBear, TeddyBearPhone, willcom
All products recommended by Engadget are selected by our editorial team, independent of our parent company. Some of our stories include affiliate links. If you buy something through one of these links, we may earn an affiliate commission.
Share
Tweet
Share