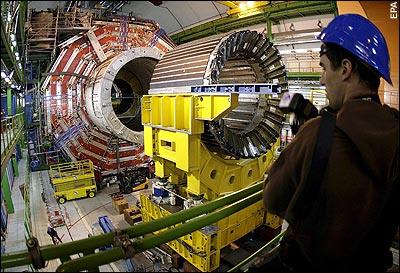 Really people, enough is enough. Death threats? Seriously? According to a fresh report from the Telegraph, gurus working on the mysterious Large Hadron Collider are receiving all sorts of strange messages, e-mails and faxes as the go-live date (this Wednesday, supposedly) draws ever closer. For those curious about why some folks are up in arms over this thing, we'll simply point you to this very informational rap video; for those opposed to nerdy hip-hop, let's just say its primary goal is to "seek out new particles including the long-awaited Higgs boson responsible for making things weigh what they do and the possible source of gravity called dark matter." Somehow or another, the paranoid among us think that carrying out those tasks will rip the world wide open or leave you stuck in 1990 with nothing in your CD player but Ice Ice Baby. Okay, so maybe that last scenario is worth getting worked up about.

[Via TGDaily]
In this article: CERN, death threat, death threats, DeathThreat, DeathThreats, Hadron Collider, HadronCollider, nuclear, particle, science, UK
All products recommended by Engadget are selected by our editorial team, independent of our parent company. Some of our stories include affiliate links. If you buy something through one of these links, we may earn an affiliate commission.
Share
Tweet
Share