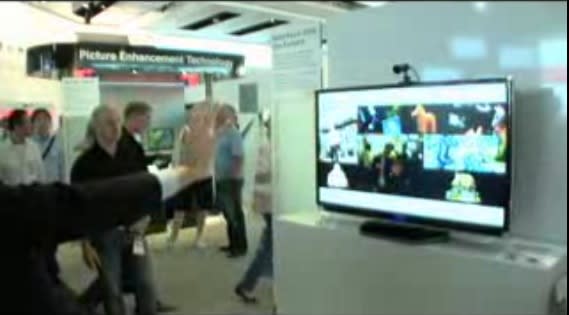 Remember that Qosmio G55 laptop with gesture control? Yeah, the one with the Cell-based SpursEngine under the hood. Well it looks like Tosh is bringing that so-called "natural" gesture input to its future cell-based televisions. Judging by the latest video alone, the gesture control seems more at home on the big-screen TV than smaller-screened laptops that require a higher degree of precision and closer viewing proximity. Demonstrated on a prototype, Toshiba hints that the tech might come to future Cell-based TVs -- interesting what with the cell-based ZF televisions already announced for Europe. While we find pushing buttons on a remote about as natural (and lazy) as it gets, here's hoping for this arm-flailing gesture control on future Toshiba TVs just for the nerdiness of it. Video of the G55 gesture input as well as the prototype television show at IFA after the break.

In this article: cell, g55, gesture, ifa, ifa 2008, Ifa2008, qosmio, qosmio g55, QosmioG55, research, rumor, speculation, zf
All products recommended by Engadget are selected by our editorial team, independent of our parent company. Some of our stories include affiliate links. If you buy something through one of these links, we may earn an affiliate commission.
Share
Tweet
Share