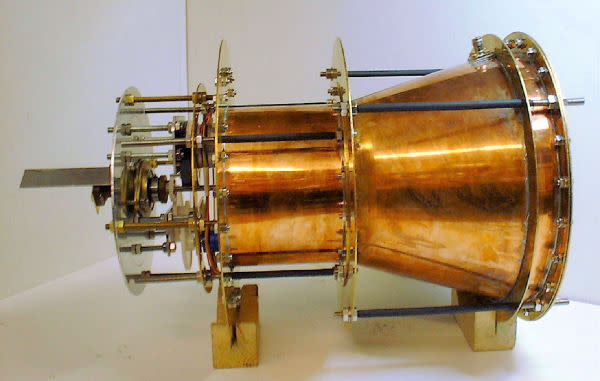 While the rest of the world was in some kind of mass coma over the past year, China decided to have a hand at building the highly controversial Emdrive (electromagnetic drive) -- an engine that uses microwaves to transform electrical energy into thrust, all in a comparably light-weight, efficient package. The end result could mean 41 day journeys to Mars, not to mention terrestrial vehicle propulsion and satellite applications. Perpetual motion malarkey you say? British scientist and originator of the concept, Roger Shawyer of Satellite Propulsion Research Ltd. (SPR), assures you it's nothing of the kind, and Chinese Professor Yang Juan concurs. Research headed by Juan at Northwestern Polytechnical University (NPU) in Xi'an commenced in June 2007, and a thruster now being built based on Shawyer's theories is scheduled for completion by the end of this year. Meanwhile in the US: cue the sound of crickets.

[Via Wired]
In this article: electromagnetic drive, ElectromagneticDrive, Emdrive, Impossible Space Drive, ImpossibleSpaceDrive, Northwestern Polytechnical University, NorthwesternPolytechnicalUniversity, NPU, perpetual motion, PerpetualMotion, Roger Shawyer, RogerShawyer, Satellite Propulsion Research Ltd, SatellitePropulsionResearchLtd, SPR, Yang Juan, YangJuan
All products recommended by Engadget are selected by our editorial team, independent of our parent company. Some of our stories include affiliate links. If you buy something through one of these links, we may earn an affiliate commission.
Share
Tweet
Share