Apple's first Music Awards will be headlined by Billie Eilish 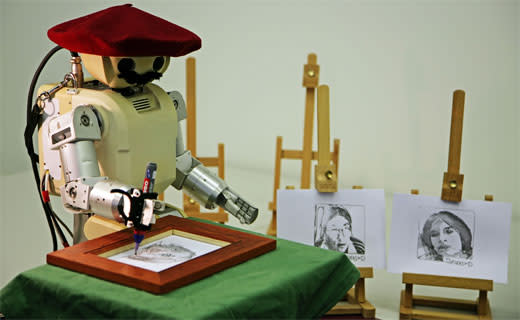 Leaps and bounds have been made with Sylvain Calinon's robotic portrait artist since we first caught a glimpse of this amazing AI being -- and no, we're not just referring to the stylish beret and mustache. Now dubbed "Salvador DaBot", the portraitist has developed far more advanced conversation skills, along with a voice that sounds a lot less like Steven Hawking. We kinda miss that feather pen he was sporting before, but his movement's a lot more natural now and his new marker seems to have helped his drawing style -- similar to old-school comic art. See this awesome little guy in action after the break.

[Via Sylvain Calinon]
In this article: artist, drawing, portrait, portrait artist, PortraitArtist, portraitist, robot, Salvador DaBot, SalvadorDabot, Sylvain Calinon, SylvainCalinon
All products recommended by Engadget are selected by our editorial team, independent of our parent company. Some of our stories include affiliate links. If you buy something through one of these links, we may earn an affiliate commission.
Share
Tweet
Share