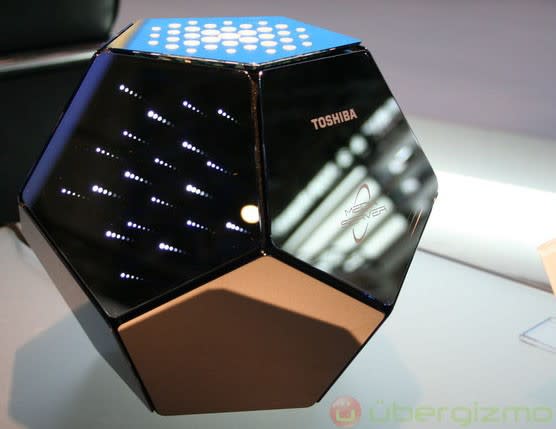 Here's another mouth-watering concept on display at CEATEC today: Toshiba's Media Server -- not to be confused with some kind of nefarious explosive device from an early episode of Doctor Who. It uses NFC to download files from your cell phone, which in turn can be displayed on a TV via WirelessHD. But best of all, it's shiny and looks nothing like some of the mundane media servers we've seen in the past, which is reason enough for us to want one, or perhaps a pair to make 2d12. Here's hoping it gets past the concept stage.

In this article: ceatec, ceatec 2008, ceatec2008, dodecahedron, media server, MediaServer, nfc, toshiba, toshiba media server, ToshibaMediaServer
All products recommended by Engadget are selected by our editorial team, independent of our parent company. Some of our stories include affiliate links. If you buy something through one of these links, we may earn an affiliate commission.
Share
Tweet
Share