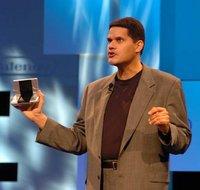 Nintendo of America president Reggie Fils-Aime sat down with VentureBeat on the heels of last week's DSi announcement, and while he didn't drop any major bombshells, he did put the kibosh on those Wii HD rumors, saying that they were "pure rumor and speculation" and that Nintendo wouldn't show off upcoming models to devs as the rumors claimed. Reggie also downplayed the talk that Nintendo is going head to head against Apple, saying that Ninty's always "viewed ourselves as competing in a larger entertainment space." That's the end of that for now, we suppose -- but Reggie didn't close the door on either rumor entirely, and his closing comment that Nintendo's good fortunes "makes us the most paranoid people in the world" certainly keeps possibilities open. Hit the read link for the full interview.

In this article: ds, dsi, nintendo, reggie fils-aime, ReggieFils-aime, rumor, rumors, wii, wii hd, WiiHd
All products recommended by Engadget are selected by our editorial team, independent of our parent company. Some of our stories include affiliate links. If you buy something through one of these links, we may earn an affiliate commission.
Share
Tweet
Share